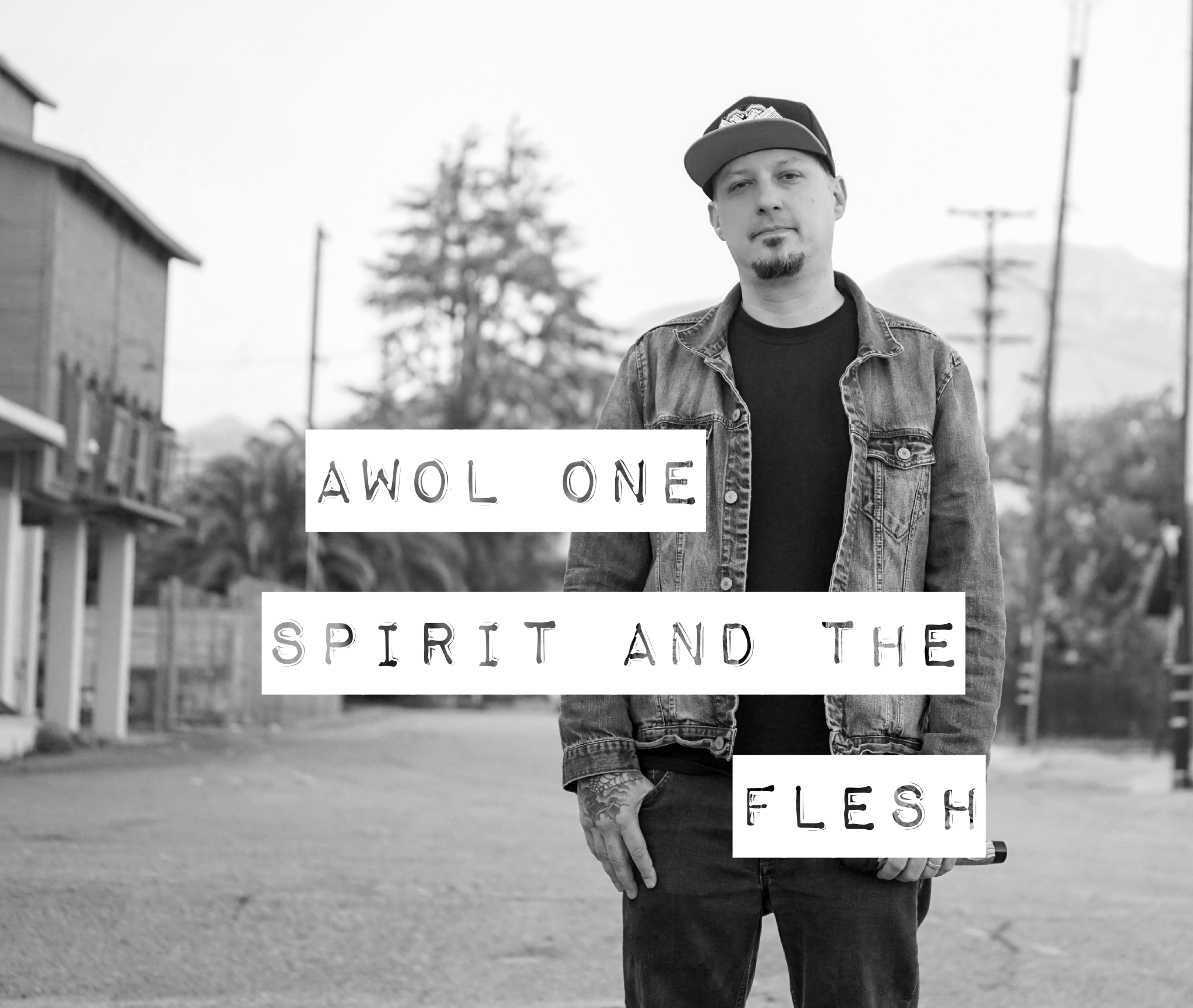 I love food and have a great time featuring food on my media but I my first love is the arts. That’s how all this started so of course I was thrilled to work with AWOL ONE on a music video. I met AWOL a number of years ago back when I had my gallery in Pomona and was hosting music and arts events. In addition to being a very successful hip hop artist,  he’s also a very talented graphic designer and graffiti artist as well as published children’s book author. It’s been great following all his artist ventures and of course an honor to be small part of it.

So this all started with a text asking me if I was down to do a video. Then came a link with several songs to work from. I chose Spirit and the Flesh because I like the fast pace but had a few “chill spots” so that gave me a few ideas that would work with his dark black and white theme he usually displays on his social media. What we shot wasn’t what I initially had in mind but it came together real quick and I had enough footage to really have fun with. Tony is really easy to work with and has been doing this for over 20 years so everything flowed and we knocked out the filming in a little over an hour. It took 5 filmed run-throughs, a drone shot and a few random clips. It took a few days to edit and gave me the opportunity to really go beyond what I normally do for food and travel features.  Have a watch and be sure to like comment and share!

So as per usual I’ll throw in some behind the scene pics. I’m going to go ahead and kick this off with a pic of Moe teaching Evie how to play the drums. I brought her with me to the shoot because I though she would have fun watching. She played while we filmed and when we were wrapping up Moe let her jump on the kit and play around. Thank you Moe!! Evies first step into the world of music.

We filmed in a big lot just outside of Downtown Upland. I’ve seen bands practice on this loading dock and people doing car shoots so one of my goals was to make sure it doesn’t look like what I’ve seen before of this location in other photos and videos. We had this discussion about filming in Pomona. So many people film in Downtown Pomona and having lived there for a while it’s so easy to see and know exactly where their filming to the point it’s played out and just a distraction. Don’t get me wrong, i’ll still be filming down there but For the purpose of featuring Pomona, not using it as a generic backdrop.

The shots I got of AWOL doing his thing on the little turntable set up didn’t get too much play in the video. It was a fun improvised set up and I got some really great video clips and stills so I’m going to keep those clips and maybe use them in a future project. I wish I would have had a second camera person to capture how this shoot came together. I think it’s stuff like this that made it fun and helped keep that look we wanted.

I really like taking photos of people taking photos. You’ll see it a lot in my food videos at foodie meetups. I like to show what goes on behind the scenes. I think it’s because I appreciate being in that moment and want to share that with people. What goes on behind the camera is sometimes more interesting. That was certainly the case with this video shoot. A lot of little things you dont get to see and ever hear about. Or maybe don’t even care about haha There’s a chair on the loading dock (just our of frame) but in the video. AWOL asked me if I wanted to move it but I decided to keep it in the shot. Why? No idea, it was a old broken chair and I just liked it there. I even took video of the chair and it was in the video but was cut so I could add a drone clip.

This is a still taken of the microphone used in the video. We filmed it being dropped a few times. In the end of the video he drops the mic, shakes hands with Moe and walks off into the sunset. The idea was to insert a clip of the mic hitting the ground and kicking up dust in slow motion. I definitely pulled off the shot and it’s really cool but ran into two problems. The mic was facing the wrong direction and his shoes should have been in the background as he steps away. In the video you see him pick up the mic. I inverted the image to turn the mic around and instead of the drop I used a section of video where he picks it back up. I still like the shot and I really like this still image.

There wasn’t too much planning involved in this shoot and it was fun to improvise a lot of what we did. I’ve been on a lot of complicated shoots and they’re not fun. Everyone gets frustrated because things don’t go as planned, they go way over budget and take longer to film and don’t get me started on the editing of a crazy project. This was still a lot to edit but since things flowed so smooth I was able to keep a mental tab on key things I wanted in the final cut and had a good idea of how I was going to piece this all together. We only moved this little set up twice. Moe broght a simple kit set up with a Cajon as a base drum witch sounded really good. We had a little speaker box to play the music along with portable turntable and mixing switch wich wasn’t hooked up to anything but looked cool in the video. Tony found a box and board to set it up and it worked fine. In fact i think it was perfect.